Students from Norse’s International Aviation Academy (IAA) are set to be among the first people in the country to build an electric light aircraft that actually flies.

The Academy has teamed up with Norfolk-based social enterprise NUNCATS to offer a summer school where engineering students will work on the pioneering, solar-powered Skyjeep.

Norse Group Aviation Academy Manager, Alan Rampling, said: “This is a fantastic opportunity for our students to get hands-on experience, assembling, functionally testing, and witnessing their aircraft being flight tested.

Spearheaded by Tim Bridge, Technical Director of NUNCATS, the project will focus on replicating a ground-breaking prototype of the Skyjeep, which was built out at Old Buckenham Airfield.

Now being prepared for test flights, this is based on a Zenith aircraft, which was originally designed to use a petrol engine, but has been converted by Tim and his team for electric power.

“There is worldwide interest in decarbonising flight, and a range of firms are experimenting with ways to do this,” said Tim.

“Almost all of them focus on expensive new designs which maximise efficiency and aim to compete with the range you get with petrol power.

“The Skyjeep is different – it was designed to be cheap and simple, suitable for use by aid agencies in the developing world as well by hobby flyers.

The students who will help build the plane are all undertaking aviation engineering courses at City College Norwich.

They are being trained at Norse’s state-of-the-art Academy in Norwich, which has a Boeing 737-300 aircraft that once flew international flights and still features fully operational electrics, hydraulics and flying controls.

Also involved the project are KLM (UK), who will assist with the project, and aircraft management and handling company SaxonAir, who with the Academy will provide space for building and testing at Norwich International Airport.

SaxonAir is also considering installing a solar charging station at Norwich Airport, based on one designed by Tim and already operating at Old Buckenham.

Alex Durand, CEO of SaxonAir, said: “We’re delighted to be working with NUNCATS and the Norse International Aviation Academy on this project. It highlights the aviation capabilities we have in the region, and how collaboration can create new opportunities for us all.”

The hope, said Alan, is that the exciting project will firmly position the Academy, Norwich Airport and, indeed, the region at the cutting edge of electric aircraft development and flight.

“This zero-emissions aircraft project has already been a catalyst in bringing local aviation expertise to the academy,” he said.

“The aim will be to development a centre of excellence in electric aircraft training, ensuring the region is at the forefront of green technology in aviation.”

As a social enterprise, NUNCATS is currently mounting a campaign to fund the project. To date, it has raised about £160,000, which got the prototype to where it is today.

Now a further £130,000 is required to complete the clone at the summer school and to resource the project properly for maximum impact.

The eventual aim, said Tim, is to build a fleet of Skyjeeps, available at cost price and suitable for use by aid, medical and rescue agencies in the developing world.

Once fully qualified, students from the Academy could set up workshops in developing countries, training engineers in local communities to build and service the aircraft themselves.

Alan added: “Until now, our Academy has always trained young engineers to work on large commercial aircraft, but this project will take us in an exciting new direction.

“Electric power is likely to play a major part in the future of the aviation industry and working on the Skyjeep will not only give students a chance to build a real plane that flies, but also to learn the vital technologies of the future.”

*For more information on the project, including sponsorship and fundraising, visit www.nuncats.org or email info@nuncats.org. 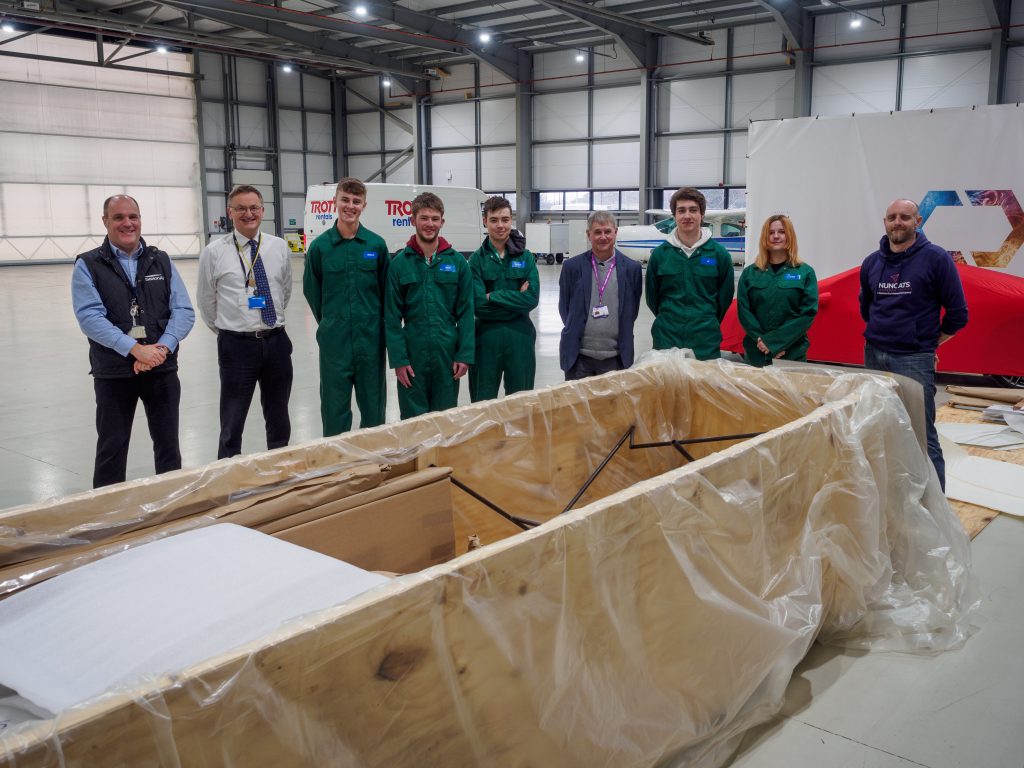